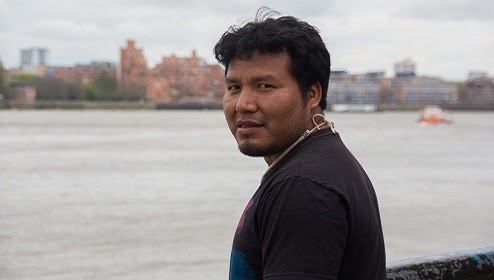 From Alto Xingu to London, this indigenous filmmaker embodies the certainty that traditional peoples are expanding their cultural reach

By Alicia Bastos, founder and artistic director of Braziliarty

London seems like a chaotic city to many of us. Imagine, then, what it seems like to an indigenous man who grew up in a remote village within the Alto Xingu Indigenous Reserve in central Brazil. “When I arrived in London, the first thing I thought was: I don’t speak English, I cannot read, I don’t know what to say to approach someone, I don’t know how to take a bus or walk on the streets.”

Takumã Kuikuro was not alone, however. Supported by Brazil’s Ministry of Culture and National Arts Foundation (Funarte), in partnership with the British Council’s Transform program, the indigenous Brazilian recently spent months two months in London to undertake an artistic residence, which will culminate in a film scr

eening at the People’s Palace Projects.

“I’m here in London filming and promoting my work and our indigenous culture”, Kuikuro said. As a member of the Kuikuro people, Takumã grew up in the village of Ipatse and learnt about filmmaking through Brazil’s NGO programme Vídeo Nas Aldeias (Video in the Villages). Documenting the customs and culture of indigenous people, he received international attention for his films, including The Day the Moon Menstruated (2004), The Smell of the Pequi Fruit (2006) and The Hyperwomen (2011). The latter, was screened at the Embassy of Brazil in a special event in April while Kuikuro was in London.

Brasil Observer spoke to the filmmaker to find out how he got started in film and what motivated him to come to London to present his particular vision of our planet and existence.

Takumã Kuikuro was born in 1983. For most of his childhood in the village of Ipatse, he had no school to attend. Until he was eight years old, he had never heard a language other than that spoken of his tribe.

In 1992, however, a local indigenous leader went to Rio de Janeiro for the ecological conference ECO-92 and ended up staying there to study. When he returned to the village in the Alto Xingu, about a year later, he organised classes to transmit his knowledge and teach the young generation what he had learned in the big city.

“He brought a few pencil and notebooks but not enough for all of us. We used to cut the pencils in pieces so everyone could have one. It was really hard for us to learn, our elders couldn’t help us. We had no ways to practice or get more information”, remembers Takumã.

In 1996, the Socio-Environmental Institute (ISA, in Portuguese) created an indigenous teacher formation course, giving support to the initiative in Ipatse, with Portuguese and Mathematics classes.

Throughout the years a few organisations and educational projects arrived in the community including Video nas Aldeias, a project that has been promoting the creativity of indigenous people and their images, teaching them video skills to document and tell their stories since 1986.

“Since the first workshop around 2002, I felt really curious about it and when I started making films, I couldn’t stop. Vincent Carelli [the  Franco-Brazilian filmmaker and anthropologist who created Vedo has Aldeias] taught me how to hold a camera for the first time”.

Takumã’s passion for making images kept growing and he felt a mission to help his community keep its values. The Cacique Kuikuro, the head of the community, was also concerned because young people were losing interest in learning the traditional culture, chants and rituals. He saw the elders dying and with them precious knowledge.

“This is my role: to archive our community’s culture, I’m responsible for documenting and teaching. We have two types of work: we document the rituals, step by step and do a simple sequence editing it, for our archives and to use it to teach young people. For them I am an example, I’m the first one that made this happen, so they want to do it like I do. They see me doing this work and want to learn, they see me travelling and want to do it too. They see me representing the Kuikuro as much as any indigenous Brazilian”.

Takumã explains that they also share this archival material with other indigenous peoples, travelling around the upper Xingu River region. They do not share or sell this to non-indigenous people, simply because the content would not be understood.

The other type of work is the films they share with the world, telling stories of the daily life in the villages, the traditional culture, rituals and so on. These films are also shown in the indigenous communities.

“When we travel the Xingu River to share my work with other indigenous groups, we take everything with us, a generator, equipment, all films. When we arrive in the villages we can hear the generators working and I listen to them watching my films, this is very important. It’s a very profound process for the indigenous to see themselves in the screen. They are badly influenced by the commercial television and lose interest on their culture. The screen makes us realise things, makes us learn from our own images”.

He is critical of several changes that television has brought, with the idealisation of non-indigenous people, and the temptation of material lifestyles achieve through consumption. Indigenous names started becoming rare and a fear of violence and abuse started growing. Consequently to the lack of information and some previous experiences, the indigenous people were critical about Takumã.

“It was really hard in the beginning, they thought I was going to sell everything, sometimes they even broke my camera or chucked me out of one village. They have the impression I’m getting a lot of money doing this, because I travel a lot, internationally as well. And I need to explain that is not about making money, it’s about taking our culture to the world, representing the Kuikuro and all indigenous culture. They believed non-indigenous people were behind the films and that indigenous people couldn’t have made them. Film shows everything, images, sounds, movement, and feelings. Many people don’t know how our daily life is and what happens there”.

It has taken Takumã many years to gain the trust of other indigenous groups simply doing his work. He explains that he does not earn money to travel, all his expenses are covered by grants, but he does not earn money or sell things. By teaching people in the villages as well, they are able to experience filmmaking, understanding that is not about one person behind the camera, but a group of people working together, telling their story.

“Now we are welcome, they can understand the process better and trust me. They now invite us to document their rituals and we teach them how to do it themselves. They tell me their stories, and want to be in my films. To explain them why these things happen to me, I can only say that it must be a spiritual gift”, says Takumã.

Indeed, Takumã reached an unimaginable thing for the most. “I learned observing. I had never left the community and suddenly I was inside a plane, such a strange thing, like a dream, I was flying”.

The dream continued. In London, during his residency, the indigenous Brazilian filmmaker toured the city with a camera to film the British capital like a village, with its different peoples and rituals. The result can be seen in the People’s Palace Project seminar on 10 June. Sadly by this time, Takumã will be back in Brazil, for there is an urgent mission: to document and give eternal life to his people.

“We don’t need a non-indigenous person to come and make their films and own our images. We have the right over everything there; we can make our own films. I say this to my people so they can value our indigenous film work. But to make this happen we need sponsorship and equipment. When people want to come and film, they send a proposal and we say what we want, that usually are cameras, cables, microphones. We have a strong belief in film, that the camera is fed with people’s soul, meaning when we film someone, we capture them in the video, and as long as the films are seen, people in them will live forever within the community.”

From the colonial period to the recent battles in Congress, indigenous rights are under constant threat in Brazil