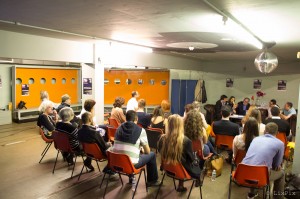 Warming up the Latin community to Casa, Latin American Theatre Festival this year, The Night of Ideas was a kind-of-one-month-before event inspired by the Nuit de la Philosophie, a whole night talk and film screenings concept created by the Ecole Superieure de Philosophie in France and is promoted abroad by the Institut Français. The 12-hour event hosted a full programme within Latin American culture, with debates, films , performance, music and food. – “Some people in our team know well the concept of the night, and we decided to adapt it. This is an experiment it have no ambitions.” – confessed Daniel Goldman, the Creative Director of the festival.

The location was the Rose Lipman Building a community centre in DeBuvoiur Road, part of a council state area in uprising Haggerston, the choice of location was to introduce it to the audience of the festival, looking forward to the events during the festival.

The four stores community centre, included a small bar by the entrance where we all gathered looking at the production running around. Speakers and artists were mingling with the audience when an circus style buzz sounded in Daniel’s hands the hands that with producer Johanna from ‘La Zuleta’ humorously invited the early public to go and discover the program around the building, like hunting treasures in a labyrinth.

On the basement, one of the rooms meant to be the kitchen, where could have later turned into one, however early, was only the film screening room. On the programme there were 20 films between short films and documentaries, a mix of interesting topics such as social causes like Meet My World: 6 short films with children of Peru by Amantani and the moving Bottles of Hope, a story about the work of Karol da Silva and Roberto Rubalcava introducing creative skills to kids in Moçambique. The project Brasiliance by StoneCrabs Theatre presented extracts from their oral history documentary ‘Brasiliance – London pathways: heritage, identity & imagination’ and they explained the project and showed a couple of the videos about the lives of Brazilians living in London, who migrated to London between 1960 and 1989. Other themes explored were politics with with Fidel Whatever Happens Documentary by Goran Radovanovic; drugs with Cocaine Unwrapped Documentary directed by Rachel Seifert; protests with and Protest Documentary by Michael Chanan and more.

Later on, the party came to the kitchen until late with Dj’s such as the events Movimientos’ leader Cal Jader 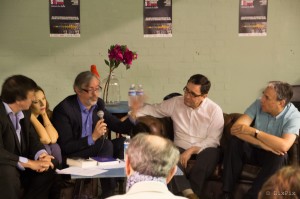 In the living room, the talk programme explored hot topics involving Latin American in the world, from the raise of the contemporary art in the world, to sexuality, tripping around politics on immigration and the Colombian process of peace, cities and drugs. With some very special guests and an attentive audience, conversations sparked opinions of all sorts, and the essence of having this level of conversations are to inform and question.

Upstairs at the hall had a very mixed purpose, dinner was served until late, there were theatre performances by Renata Novaes, by Victor Esses and Sitron Panopoulos and Renata Novaes, an interactive Bio-dance experiment with Nelson Galante, the Director Natali introduced the Community Theatre Group sho

w 2014 that works about Gabriel Garcia Marquez texts on stage. There were also two talks, one about the body and other about football, that felt slightly out of plac e, once there was a whole room dedicated to talks downstairs. And as if it wasn’t enough two acts of live music, by Alexis Mercedes and Tres Argentinas.

In between all, the dark old corridors with the paints coming off the walls, on corners and stairs’ bottoms, shades of cartoon characters by Sylvia Libedinsky gave a touch of mystery and surreal surveillance thought the way. And if you read the small lines, that if you said the code word Luz Negra/Black Light, you would be directed to a performance where two activists debated about their death from the ‘other side’.

The 12 hours marathon programme of the Nignt of Ideas felt overwhelming until midnight after the intention was to let the hair down and have a dance. “W 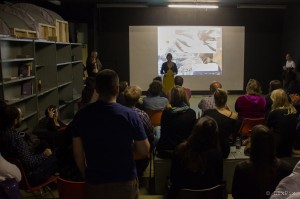 e programmed in a way that everyone was going to be missing something else they wanted to see “ points Daniel wishing to leave a taste at the audience wanting more “there is potential for a night like this and the community came and supported”- he smiled quite tired.

For a new event that sold few tickets in advance and had a turnover of over 400 people before midnight and more later, the ambience was very friendly and interactive, to be able to see some key people of the community engaging was definitely a good outcome. 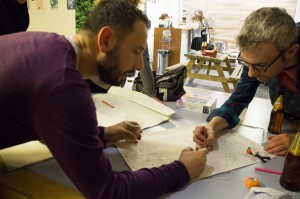 The simplicity of the building and no decoration or lighting made the experience about the content. Culturally informative the night instigated the crowd to interact and exchange and there were sparkling discussions on the corridors and stairs. For the full programme click here: nightofideas programme.

If creating no expectation can surprise people, the Night of Ideas, that didn’t have its full programme promoted until last minute, has got the Latin Americans and fans looking forward to this years casa Festival very much.

Check the programme and book your tickets here: http://www.casafestival.org.uk/festival/casa-2014/programme/