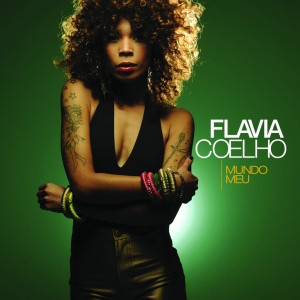 It has been three years since Flavia Coelho caught Europe’s ears with Bossa Muffin, a contagious blend of funky bossa hop rhythms, acclaimed by critics and applauded by the public in Europe.

Mundo Meu, the new album released by Mr. Bongo Recs., keeps the tradition for mixing many references, recalling Brazil’s music, filled with so many African and urban elements, but innovative with the outcome.

Lounging with humour, there is a balkan upbeat tune, a bolero and a reggae, with a Caribbean tone bouncing throughout the whole album. The lyrics are involving, with some cheeky chorus for the gringos to learn, she talks about devoted love, street artists and mostly about people, with a positive vibe.

Highlights for the beats by drummer Tony Allen in ‘People Dansa’, and ‘Hoje’, an African rolling sound with a touch of ‘forró’ with accordionist Fixi and some hip-hop vocals.

A smoother groove than Bossa Muffin, Mundo Meu is a spring album and states Flavia as a singer that plays with international tropical sounds of Brazil.

On stage, Flavia has a captivating passion, a wiggling hypnotic charisma not to be missed. Catch her at Rich Mix on the 18th May.