Braziliarty | Reflections on the 55th Venice Biennale and Brazil at it
15169
post-template-default,single,single-post,postid-15169,single-format-standard,woocommerce-no-js,ajax_fade,page_not_loaded,,vertical_menu_enabled,side_area_uncovered_from_content,columns-4,qode-theme-ver-13.2,qode-theme-bridge,wpb-js-composer js-comp-ver-5.4.5,vc_responsive

Reflections on the 55th Venice Biennale and Brazil at it 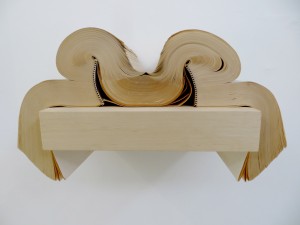 Going to the Venice Biennale for the first time is an experience that requires more than to read as much as you can before, speak to people who have been, plan at least five days in Venice, pack comfortable shoes and stylish wear.

After reading a few but particularly one specialised magazine issue about this year’s Biennale, I felt slightly apprehensive. Reading that if I “want to see something new I should better go to Montevideo…” made me expect a looping déjà-vu. 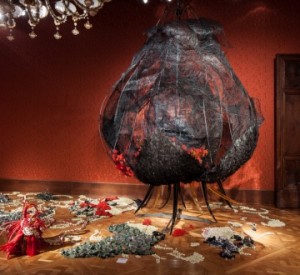 Thankfully, I arrived to Venice informed, but still open to be surprised and searching for the Brazilian participation at Palazzo Enciclopedico and collateral events.

On my first end of the afternoon, I visited Glasstress, White Light / White Heat, the show at the renowned Instituto Veneto di Scienze Lettere ed Arti, located at the majestic Palazzo Cavalli filled with history, ornamented interior and marbles, where the contrast of glass sculptures from some masters like Portuguese Pedro Cabrita Reis, Israeli Ron Arad, Hew Locke and Rina Banerjee with the intricate ‘In the Darkest Blossom was a Mythical Beast, Mythical Island, Mythical Sea, 2013′. This show is extended into other two sites including Murano, the home of Venetian glass.

On the second day under the sun, I discovered the Giardini, much coincidentally during a national holiday, with other thousands of people, between tourists of all ages and languages /countries, students and kids groups taking part on the Biennale educational programmes. 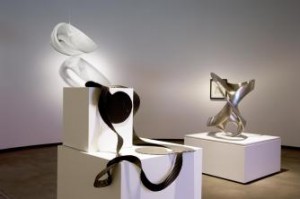 At the Brazilian Pavilion when my excitement turned to the fire extinguishers with handwritten ‘Brasil’ next to the green and yellow stripy sticker, was a sign that maybe the art in there wasn’t that involving. Entitled ‘Inside/Outside‘, the exhibition was presented in two sections: the first room showed the work of iconic Modern, Concrete and Neo-Concrete artists like Lygia Clark with Trepante/Obra Mole (1964), Max Bill with Tripartite Unity (1948-49) piece of which won a prize at the first São Paulo Biennial in 1951 and Burino Munari’s ‘Concavo Convesso’ one of the first Italian’s installations. On the second room, two more recent artists, Helio Fervenza with a heavy academic background in teaching, presenting photographs that felt out of tune. The attractive work of Odires Mlászho on books with the series Livros Cegos (2010) presents large books re-arranged into sculptures interlacing its pages and it fit tastefully into this year’s theme of the Biennale.

The whole ensemble felt somehow disconnected and not as exciting as we know the Brazilian art scene is at the moment, but that could be that ‘Inside/Outside’ meant exactly that, curator Pérez-Oramas aimed to show diversity. All artists are deep into the art scene, different form the ‘outsiders’ shown by Massimiliano Gioni. Organised by the São Paulo Biennale foundation, wouldn’t that be another reason to curate a pavilion that shows influential and exponent artists as well as emerging ones? Although some of the Modernist artists are on the top of Brazilian art in the international market, maybe to maintain the growing interest and to really show diversity, the Brazilian pavilion need to tight better our current position in the art scene, with the country’s current contexts and the exciting art Brazil has to show.

Great British’s magician Jeremy Deller’s satirical storytelling pavilion, was like hearing a tickly joke and taking a punch on the stomach simultaneously. The German pavilion and the Greek responded to the current contexts reflecting knowledge and historical, political and economic subjects. Russia and Israel, included audience participation in distinct times of the art production, bringing a pleasant dynamism into the pavilions. 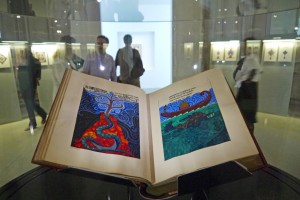 On a personal level, the main pavilion was touching, almost emotional. Having from mystical to scientifical and educational works, all referring visually to some sort of knowledge output been appreciated as art rose a powerful new perspective. The Red Book by Carl Gustav Jung, tarot drawings by Alastair Crowley, blackboards by Rudolph Steiner, all together proving that if art is a medium of communication that express knowledge, that frees the interpretations of art and be an artist, making knowledge come from anywhere. This conceptual show challenges this endless wishing to join knowledge and it spreads the questioning of what art can be, depending of which concept is put on. Also a critic into human’s desire to know everything, just to realise that we won’t ever know everything, as knowledge is being multiplied and communicated as seconds go by.

This Biennale experience became even deeper when a surprising talk between Massimiliano Gioni, Lynne Cooke and Ralph Ruggoff discussed ‘Existence is elsewhere – the myth of the outsider’. Contesting the appropriate translation of the talk title, prejudice and labels from the art scene, the three power figures reflected on outsiders (of what?) or insiders as being scholarly or privileged artists, with much resistance to admit the peculiarities and market dependencies that the arts’ world suffer. 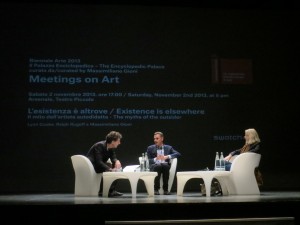 With an opinionated audience that pushed uncomfortable comments and questions through, brought the conclusion that existence is not elsewhere but everywhere and that the art world is open for that and should be even more, weather talent can range from a divine connection to a long life of hard work polishing influences, what really matters is that creative expression within context can be art. And when Gioni was asked about environmental and social and political art, he, referring to them as a ‘pile of s***’, contradict himself meaning that themes such as current topics were not necessarily a reason of choice for this biennial’s theme. What was a surprising comment, particularly after Documenta 13’s success highlighting art and activism as a way to add value to the art as an effective way of not only expressing but influencing. 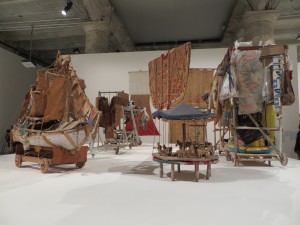 Soon, I saw myself about to knee down and pray in front of the Brazilian Bispo do Rosário’s work, beautifully presented in the center of a room at the Arsenalle. Tamar Guimarães and Kasper Akhøj showed a beautiful 16 mm film entitled Captain Gervasio’s Family. And on the corner of the garden, hidden in a tower by the water, Paulo Nazareth’s installation felt like he had just arrived from his walking journey. The young artist, uses his mixed background as source of inspiration and produces his work in movement. He has also taken part at the Lyon Biennale this year.

Still curious about the Latin-American participation, I found Nicola Constantino living in the skin of Eva Peron and an installation that discloses more of her many facets. The Chilean pavilion sunk the Giardini, and if that was a critic or a vision of the future all ending underwater, or if it looked like it wasn’t even there.
The Italo-latino pavilion had one only Brazilian work that was a more documental video on labour, a very documental research. The highlight, U parfum from Uruguai, made of flowers from the president Mujica’s farm, will be auctioned after the biennial raising money to create the first art fund of the country. Latin–America and their relationship to cosmetics is questioned again, rethinking about Nicola’s soap.

Some controversial things about this Biennial were being asked to pay 16 euros, to see the Cuban pavilion inside traditional Correr Museum, almost infuriating when thinking that the Venice Biennale is such an important platform for their artists and how much can you ask for people to pay for work coming form a socialist country, already restricted to exposure in the arts scene. Even more puzzling was to find 70% of the Kenyan pavilion showing chinese artists, and that both artworks had no communication, neither its artists whatsoever, showing the reality of financial influence into the curatorial practices at the biennale.

It is obvious that maybe for the art scene, the Venice Biennale may no longer be so original, or to have a relevant affect into the art market prices. For artists, is a large statement of recognition, exposure to their work into a platform that is one of the top art showcases. This year Massimiliano Gioni has dared beyond the obvious, his research states discovering new sources of inspiration, from all sorts of backgrounds, making even stronger the matter of context into art. However, it must be understood that this event is visited by thousands of people, some of them having an initial contact with the art world, others that to learn more, and for that only power of experience, opening up and wakening curiosity, reaching the mass creating influences, it is the most valuable thing to be taken from my first Venice Biennale.