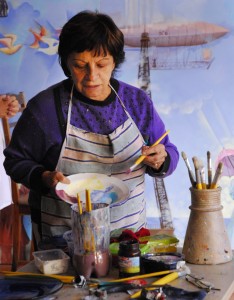 In an earlier interview to Braziliality, the great collector of Latin American art, Catherine Petitgas, mentioned that the world of collectors still has much to discover about Brazilian artists.

One such case is the giant painter Yara Tupynambá, typical lady from Minas Gerais in all its senses, from her sympathy by telling the story of the region in her murals and her paintings. Spending a day in her company, was exciting to see and feel her energy, her passion and knowledge not only to create but to live art.

“I consider myself a happy person, I have joy in living”

About 50 years ago she came from the countryside of Minas Gerais to study at the School of Fine Arts in the capital, with one of the greatest masters of Brazilian art, who has influenced many generations: Guignard. Today, there is a renowned art school with his name in Belo Horizonte . Yara also learned from Goeld and studied at the Pratt Institute in New York.

In her career, the artist has produced around 3000 paintings and has gone through many phases, from cubism to collage; exhibiting worldwide, and had a room at the São Paulo Biennial, dedicated to her in 1974. Currently, her exhibitions are commercially sucessful, she manages to save only one piece for her archives. In her latest collection of landscapes, the artist entered the forests of Minas Gerais to paint them, all ecological reserves landscapes.

Yara is one of the most traditional muralists in the country, having painted over 68 murals until today, many are in public buildings and some are listed. Currently, Yara launches a textbook on Muralism, since Brazil, with such a rich scene of street artists, should know and respect the history of murals, which in the past meant storytelling with a social background, such as ’ Guernica ‘ of Picasso or in other places of Latin America, where it had a political slant of great influence, such as Diego Rivera murals in Mexico.

” The mural is an open book where people read” Yara mentions Rivera to explain that “a mural is an art of communication, a bridge between the artist creation and reality, to an audience who have to understand and thus identify with what the artist is painting. The wall must reach people since the Renaissance murals that were understood in that time, because the soul of the artist had a connection with the people. The technique for murals must start from the concept that the wall should measure at least 18mts2 . The composition of the elements on the wall is essential to unfold the story. The political murals in Mexico educated the public to the need of asserting their nationality, with an intellectual education and development of criticism, which led to the revolution. Also the murals by Portinari, which give an insight into Brazil, which has a human expression, not only for its beauty but for using Brazilian icons such as cocoa, coffee and like this, carrying so many messages about the Brazilian nationality. The mural needs to go beyond figurative expression, I could paint a mural with circles representing carnival, but I think that there is space for more consistency in the message. “

Minas Gerais currently has a large presence in the international contemporary art scene with young artists exhibiting in major galleries around the world, with curators who are influential and of course, the international recognition of Inhotim. What do you think about current artists and what can they learn from Brazilian masters ?

“We can all learn a lot from each other. I would like to mention Adriana Varejão, who understands very well about compositions, she goes to the past and search her own experience within, mentioning her mural at Inhotim, which has a very balanced composition between positive and negative spaces. The visual experience of the audience is very good. In street art, today there are several important artists who began as doing simply graffiti. Kobra, for example, recalls the history of São Paulo and paint it within his work. This way, he reaches the public, making then discover and respect a specific location and a time in history. The artist can only be present if he/she understands their past . “

As a professor of art history, how do you see art education in Brazil ?

“It almost does not exist at the grassroots level, in the most basic stages, such as infant schools, is entertainment, in first and second grade schools, this education does not exist. There are independent schools trying to attract an audience to get to know art. My intention, as a professor of art history, is to teach people how to see, and, using many images I can make them work their vision and understand that art is a link, an illustration of the story . In art schools you learn technique, not talent. Talent, other you have or you don’t, talent is what drives power to the artist and must be worked through knowledge, culture and experience of the world and yourself .”

“We have created what is called ‘Brazilianness’ (typical characteristics of Brazilian people), when you look at a picture of Portinari, Alfredo Volpi , José Pancetti , Di Cavalcanti and Guignard , you are discovering Brazil. It is essential that contemporary artists continue to refer to things Brazilian with intellectual consistency. Every country has artists that bring a style of work that seeks its root, with Picasso and Spain, Monet and Renoir with France. Tolstoy said: “If you want to be universal, start from your small village” – Minas Gerais is my village, which has so much history, where I find my eternal inspiration, where stories I want to tell through my art, come from. “