Instagrafite, the global street art community from Brazil to the world 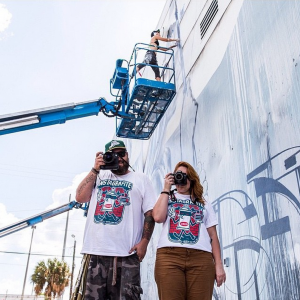 23 Feb Instagrafite, the global street art community from Brazil to the world

Instagrafite, the global street art community from Brazil to the world

Is there a formula to get over 1 million followers on Instagram in less than four years?

Marcelo & Marina are not twins or sing along on a duet, the couple composed by him, a recently former art director and graphic designer and her, a trend researcher, brand specialist and planner, both brewed in the advertising industry.

Marcelo had a passion for photographing street art around the streets global of São Paulo. Wishing to share his passion, they started a profile on Instagram to post the images. Sooner than expected, Instagrafite was taking attention, and to feed their interest, they started chasing the newest graffiti works in the capital, got in touch with the artists to discover when the new works were going to happen, so they could be there first. After five months of non-stop chasing good work to share, they understood that to keep it even more interesting they could open up the profile to people to send their photos and they could repost them giving credits.

When #instagrafite was getting hundreds of photos per day, it was necessary to create a curatorial process “we use to repost every photo with our hashtag, unfortunately people took advantage and used it for all sorts of reasons, so we decide not to use it anymore and we create a new way to receive the photos we repost” – explains Marina. Today, all photos posted are either taken by themselves or by regular collaborators, who are photographers, amateurs and professionals, artists and fans around the globe. Just in London, there are six regular contributors. “We needed to do that to keep the quality of our content, making sure the community gets new, original and good work. We try to attend the demands of our community and partners and the artists, who already see Instagrafite as a direct form of promotion for their art. We now have so much material that we have created the ‘Instagrafite-of’ with the making-of the processes of painting murals and we share passwords with our partners who vibrate together with us, and the artists.”

For the first two years they build the brand, relationships and got so much exposure working for Instagrafite practically overnight, for the passion of it, with no commercial work involved. When they didn’t have enough hours on their days anymore to share themselves between passion and money making jobs, they decided to focus on Instagrafite, with no one to back them up financially, no investors or a business plan. They started following up the four months old emails they couldn’t reply before, coming from other brands, artists and businesses with great proposals and ideas, and started making things happen.  Even though Instagrafite today is a business, they still keep some freelance work on the side.

After building the relationship with artists and brands, all sides understand that Instagrafite can promote street artwork with all consideration and respect, getting money versus street art taboo over, with decency. We all need to get paid, can deals be done on a good way for all?  They had clients wanting to use street art as a form of making their campaigns cheaper. Marina shares “ We feel the responsibility to defend the art standard of graffiti and the curatorial services. We are working to change this view and getting the value the street artists deserve.”

They started covering festivals all over the world, the first one in Canada, they were invited to be curators of Arte Rua in Rio, R.U.A in Amsterdam, Mural Fest and others around the globe. But to be in São Paulo is to be in the mecca of street art and they confess to value this even more after being abroad. “Travelling in Brazil we see how regional street art can be in the smaller capitals and cities, and how in São Paulo is just everywhere” comments Marcelo. 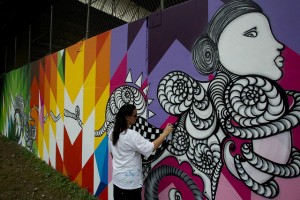 They mention about a recent incident during the previous government of São Paulo when a major wall with legendary graffiti was covered with grey paint. The current mayor, Fernando Haddad is giving more attention to this world known asset that the city has. Haddad has invited some of the greatest artists in town for a meeting, listening to the community needs, something that hasn’t happened before. In result, the largest graffiti wall in Latin America, was painted by 300 artists in December 2014 at the Avenida 23 de Maio, called Project 4Km supported by the local government.

The iconic alleys: Beco do Aprendiz and Beco do Batman in the area of Vila Madalena used to receive support and an organisation dedicated to look after the alleys, organise the painting and promote the artists was founded by Gilberto Dimenstein in 1997 and it has lost all support ended up being closed, leaving these two precious open air galleries areas with no supervision or care.

The International Graffiti Art Biennial happens in São Paulo and is going to its third edition this month, curated by the influential artist Binho Ribeiro. Marina and Marcelo think this a fundamental project but ahead of its time for what the city, meaning what the audience is ready for. The public really values street art on the streets but in galleries they are not yet very accepted, however this could be a matter of time. This is a delicate issue, to work with galleries artists needs to give 50% of their work to them, considering that the gallery don’t usually pay for the material the artists use. Some of the street artists have gigantic network of followers, independent of a gallery, they can sell directly for 100%. The role of the gallery needs to improve, collectors like to meet the artists personally and few galleries today sell street art and sometimes the galleries are owned by the artists. Instagrafite doesn’t have the intention to become a gallery “we fight against it, we are born digital and international and we trust Instagram is the perfect media for visual work. We look after a few streets, we protect graffiti areas and make sure the art is looked after” complete Marina. 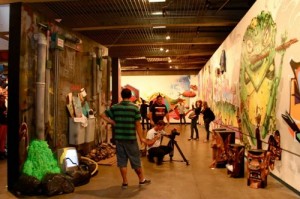 São Paulo street art scene is divided with the artists painting in the region where they come from, being rare when they happen to paint in other regions. Instagrafite promotes the exchange of artists, also with curators, acting over the collective realisation that artists on their own take a much longer way to make things happen for themselves.

Marina and Marcelo understand their journey is only beginning and they feel the responsibility of Instagrafite to learn with the artists and find new ways to make it happen for all sides, then to follow old models of commercial relationships.

“We are media creative curatorial work, we support artists and have 1.1 million of fans to look after, with a media of 1000 new followers per day, with over 20 thousand likes on Facebook” quantifies Marcelo. Instagrafite reaches North America massively, Brazil and the rest of the world.

They are an example of a clever mix of curatorial work and brand marketing bringing benefits to all parts growing the exposure of artists, festivals and brands, keeping the community informed, interacting locally and internationally.

For the future Marina and Marcelo are developing several partnerships and creating their own projects, from one app, video channel and much more to come. Watch this space. https://instagram.com/instagrafite/