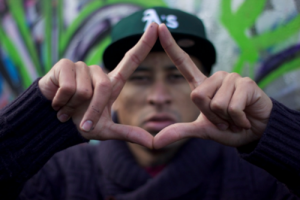 This is a story of a young man from the countryside of São Paulo state who had a dream a few months ago to fly with his painted birds. So here he is, in his first European tour shooting rays and colours wherever he goes.

From a young age Luis Gustavo Martins started drawing what interested him the most – faces, birds and monsters – and inspired by Caravaggio’s realistic observation of the human state combined with Turner’s innovative brush strokes, inspired by Van Gogh’s phases and ending with the wildness of Basquiat, he kept doing what he was passionate about until his dream could become real. 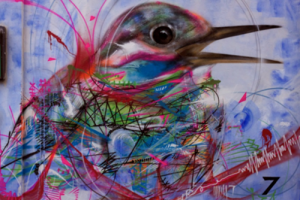 The vision, passion, rebellion and superstition which lay at the heart of Luis’ spirit, lead him to shorten his name using his lucky number instead of a letter. He was thus able to create his own identity and consequently an unique style.

L7m creatively brings together elements of Rayonism and Realism recalling the time when Abstractionism was no longer appreciated by Russian galleries, showing that both can beautifully complement each other. He also brings his style to the streets which he regards as the most open and inclusive exhibition spaces, if compared to galleries.

Luis truly believes that his paintings work as a catalyst – transforming bad energy into good and possibly bringing happiness to whoever sees it. The reason behind this is because he paints with his heart and with a peaceful mind whilst listening to inspiring music.

Completely aware about what is going on (he has thousands of likes on his Facebook page and receives lots of e mails every day) he keeps his feet on the ground focusing on how to improve his work.

His paintings traveled many countries before but this is the first time he has been able to fly on their wings and paint walls around Europe. During the 2013 tour, he has left his mark in Luxembourg, Dortmund, London and now Dubai but still desires to go to as many places as possible and take part in social projects helping people.

As a respected and best selling Brazilian Street Artist, L7M is already booked for several international exhibitions in 2014. Watch this space!