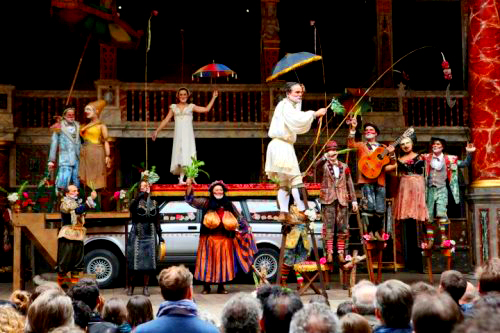 Grupo Galpao’s version of Romeo and Juliet has already been enchanting the world for 20 years. It was first put together by the Group back in Brazil and presented in the historical city of Ouro Preto. Since then, the play travelled  across the country and the world, playing over 270 times until 2003, coming to London, to the Shakespeare’s Globe Theatre in 2000.

To celebrate the Shakespeare Globe to Globe Festival and represent Brazil, there could be no better choice. Galpao’s Romeo and Juliet is irreverent and daring. The production was conceptualised in order to be able to travel to spaces where no traditional theaters were available. Even to the very depraved theatre-isolated communities in the deep country, exposing them, thus, to this form of art. Their version of the original story was made for the streets. Its urban, old school circus theater, accompanied by  red noses and silly jokes, demystifies  the complexity of Shakespearean language, turning it  into universal symbols of a love story.

The set is composed by a decorated car as its main structure, alongside characters walking in and out, from the top to the floor, with windows working as balconies for them to play. It is beyond  charming,  it gives an excellent perspective on the characters in different heights and at stage presence and movement, whilst tickling the audience’s imagination.

The spectacle starts with the troupe walking through the public, playing live music – a folk type of countryside style called ‘forro’, with traditional lyrics from serenade songs, typical from the region of Minas Gerais, the home of Galpao. Soon after, the audience is clapping hands, watching clown-like characters play jokes wearing Victorian circus costumes and walking on sticks. Portuguese merges with occasional French and English words, reinforcing the connection with the attentive public.

They have presented three times and  I saw  the first and the last ones. Doubtlessly, I share the  words of the Festival’s Director Tom Bird: “We knew that Galpao would bring this unique and lovely twist and it was going to be a success”. And so it was, three sold out sessions, stand up endless clapping hands and even tears on the corner of the publics’ eye. Galpao, this year celebrating 30 years, has again proved to be one of the most charismatic Romeo and Juliets in the world.