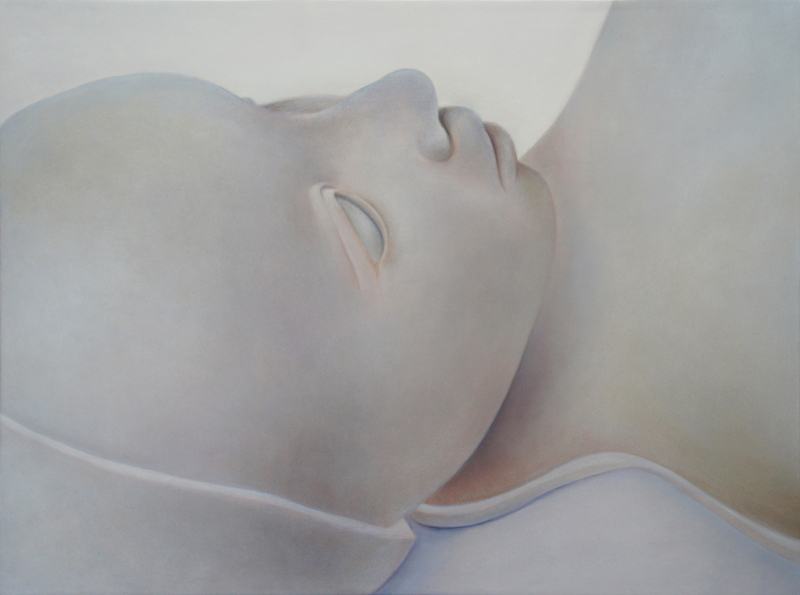 “The whole magic of beauty is in its mystery” – Schiller*

As soon as I saw Lya Nagado’s beautifully executed, but enigmatic, oil paintings ranged around the gallery wall at ICN, I knew I was in the presence of something rather special. Her paintings, whose hues and tones suggest those of the Flemish old masters, have surfaces whose sumptuous velvety textures offer few clues as to the labour-intensity of their execution. Nagado’s approach to painting is nothing short of sheer craftsmanship. Before the act of painting even begins, she applies many layers of gesso (a mixture of powdered gypsum and size) to the surface of the board, and allows the gesso to prove before starting to paint. Often working on several paintings at once, Nagado builds them up in a series of layers that create an illusion of depth of the picture plane, giving the viewer the impression of looking into the paintings rather than at them. We are confronted here by the pictorial qualities of Flemish still-life painting. There is, however, a paradox within the subjects of these paintings and that is that they are depicting something inanimate, something devoid of life and yet, through association, symbolic of life.

The psychological significance of the doll cannot be overestimated; its origins go back into ancient history, both occidental and oriental. Used as a palimpsest for human presence, its purposes have been legion, ranging from comforter to threat. The use of dolls as companions for children is ubiquitous and although the character and demeanour of the child’s doll has changed over the generations, its importance to children has not. As comforters, companions and stimulators of their imaginations for young children, dolls have no equal. The benign qualities of the children’s doll has, however been usurped by Nagado in these portraits. Is the unsettling nature of these paintings down to the fact that we are confronted by the question, are these indeed dolls, or merely doll-like depictions of people? Not exactly sinister, but nevertheless disturbing, the demeanour of these dolls or doll-like portraits come closer to that of dolls whose effigies were used, in the past, for the purposes of sympathetic magic, as substitutes for objects of desire or spite, something over which the user craved power, for whatever reason. That is not to say that there is any sense of evil about these paintings, far from it, there is an intrinsic warmth present here, which, while somehow incongruous, resists any chill that the presence of evil might introduce. It is this play of paradoxes in Nagado’s work that makes it so intriguing, the viewer feels compelled to return to these paintings again and again in an attempt to pin down what, exactly, is their message, what is the source of their visual power?

As the senses of play or power, the animate or the inanimate, vie for dominance in her paintings, we are moved to guess at the historical sources that might have inspired Nagado in their creation. Death masks, dolls, puppets, marionettes, effigies of the Buddha, Noh Theatre masks, the smooth marble visages of Antonio Canova’s or Francesco Laurana’s sculptures, all are associations that spring to mind when contemplating Nagado’s paintings and all, equally, could be sources of inspiration here. Even the paintings that seem to offer an authentic reproduction of a child’s face ultimately, on closer inspection, have an uncanny resemblance to the faces of waxworks figures – they are almost alive, almost animate, almost organic, but not quite, poignantly questioning our sense of mortality. In a subliminal way, we cannot accept that they are lifeless, such is their psychological impact that we are compelled to imaginatively imbue them with life forces, with identities, with a potential for metabolic perpetuity.

Nagado deliberately uses materials in her works that typically define classical works, in using gesso or vellum as supports for her paintings, she is referring to the historical significance of paint as an expressive medium. So, not only is the subjectivity of her paintings ambiguous, but also their age, their provenance is riven with uncertainty. Their eclecticism operates on both physical and temporal levels. As a result of this ambiguity, any understanding of the ontology of these images is very personal, as we view them; our story becomes a part of those stories at which these tantalisingly mysterious faces hint. This is borne out by the French Theorist, Jean-Luc Nancy, when he states in his book, ‘The Ground of the Image’, that “The image touches me, and, thus touched by it and drawn by it, I get involved, not to say mixed up in it.” * There is no image without me too being in its image. The synthetic nature of the narrative contained in these paintings means that any poignancy that might be detected here is a pure fabrication on the viewers part, however, the intrinsically melancholic overtones conveyed by these faces means that we are bound to experience a certain sense of sadness as we contemplate them. This sense of sadness overcomes and obscures traces of the sinister that lurk beneath the surfaces of these works; we are moved but not threatened.

Why do we find the doll-like effigies in Nagado’s paintings so affecting? Is it that they signify a permanent state of childhood whose innocence, for a whole tranche of reasons, cannot be defiled? Is it the feeling of regret that we have lost, irrevocably, that halcyon state of innocence in which we ourselves were once immersed? Is it that they represent the supernatural, advocates of a sacred, spiritual or magical world whose influences in our technocratic society become increasingly vestigial, much to our peril? Is it that their intrinsic beauty reminds of something that is now lost in our culture’s shunning of beauty as an ideal? It is probably all of these and many more, of which this technocratic age deprives us. Not to say that they are in any way intended to be reactionary, but their symbolism does ask questions of the soullessness of the machine and the chip. One particular painting, ‘Stones’ [2012] somehow encapsulates the mood of this exhibition. Yes, it is disturbing, having a cadaverous appearance, it does strongly signify melancholia, it does pose many questions as to its inspirational sources, but most of all it is sublimely beautiful, the pale pinks, pale greys, and their resultant mauves through which the light, reflected from the underlying gesso, radiates, are visually seductive in the extreme. Who says that beauty is dead, is irrelevant? Its signifiers, its influence, may well have shifted, but nevertheless it is persistent to a degree that the tropes that attempt to supersede it are not, and never can be. To summarise, death always offers the potential for rebirth, as one door closes another one opens. Life and death are inextricably intertwined and it is this fact that is admirably brought home by Nagado’s powerful paintings. Creation, in all of its facets and all of its intricacies, is ultimately beautiful.

Roy Exley is a freelance art critic, curator and photographer who has written for prestigious publications including Art Monthly, Art Review, Contemporary, Flash Art, Art Press (Paris), Blueprint, Camera Austria, Portfolio, Creative Camera and Art World. Since 2000 he has curated eleven exhibitions in London and Paris and has been a judge for the Photosynkyria Biennale in Thessaloniki, Greece, and twice for the BOC Young Artists award.