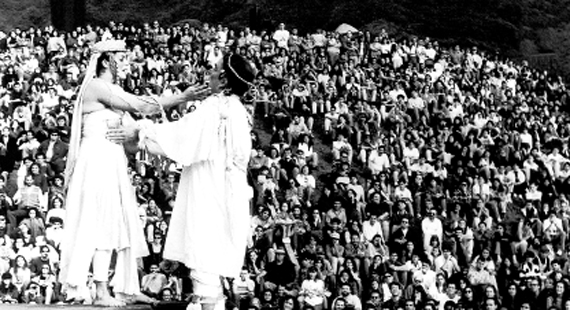 I arrived at the Globe on the Friday afternoon on time to see Galpao’s truck delivering the costumes and props through the backstage door. The adventure of finding them took me into a journey i

nside Globe’s staff members. I ended by  meeting the festival’s Director Tom Bird. He was really pleased to have Galpao back  and he was the one who took me, in person, to the technical team of the troupe . I finally arrived at the rehearsal room, tip toeing where the group, not losing focus,  welcomed my presence with a smile.

Chico Pelucio and Gilma de Oliveira producer of the comp

any, joined me at the cafe. Just by mentioning the 30 years  anniversary of their group, one could notice the energy rising in the room, their eyes glowing.  To begin with, I’ve asked them to point three key stones of their history.  A difficult question, indeed.

“The first one was to build their space where they rehearsed, have their ‘house’ in 1989, where to go from, to come back to, to welcome visitors. For us to have that it made us solid. The second was to create the Galpao Cine Horto, a presentation and rehearsal space created in 1997, opened to the public and local community offering courses, one of the largest theater library in the region. There, we offer cultural production and other professional preparation courses for the actors to develop their careers. We really believe in passing through the knowledge. Making our version of Romeo and Juliet was a very important moment. Meeting with Gabriel Vilela, very important to give the company exposure and credibility around the region, the country and the world.”

From the streets, to the stage, from the stage to public squares from the smaller cities in the countryside of Brazil to the biggest theater festivals. Anywhere, really.

What is the thing that the Company most enjoy doing?

“There are a few aspects, and internal one is that we really enjoy the fact that since the beginning we are a collective of actors, we works with guest directors but we all have diverse responsibilities, from writing scripts to working with larger artists, to sing and dance. To have the freedom and authonomy to be diverse, and be able to choose the way that we prefer.”

This is a strong characteristic of Galpao that has created an easier communication from this flexibility of performance and audiences, creating an identity and a unique style. The company doesn’t feel that necessarily attached to the street theater label, in fact they are no interested in labels. They are happy to experiment from comedy to more serious’ pieces.

“…most of our shows, wether they are for the stage, they could be adapted to the streets. This is the most important thing for Galpao, to be able to move, to get to different places, to change people’s lives. We have all equipment for light and sound for example to go into places in Brazil that have no theater at all, democratizing and making it popular the access of theater. Imagine that over 98% of local regions have no theater at all. We want to go there. There are reports and interviews of a domestic worker that after she saw Romeo and Juliet, she saw the opportunity to dream and do different things, it has opened people’s minds and we are greatful that our work is capable to do this.”

Have you performed in the streets of London?

“ Not, really we did it once in 1997 inside of a circus tent in a festival at Battersea Park. We did present in different places in Europe like Spain, Italy, France and Portugal. In London, street theater is limited to performances like in Covent Garden, but we never saw the chance of doing what we do on the streets here.”

As an international Company and one of the most respected Brazilian Theater Group, how do you feel as being Brazilian in the arts scene around the world?

“We had two different times, before the economic crisis around 1988, we have come to Europe and have interacted with companies from here, from the artistic and structural experience and we have got inspired and learned from it. Setting up our first space happened after coming back from a trip to Italy and understanding how other companies were run. There is also the lack of understanding for the international media of what we are, where we come from, why we do things as we do. There is a lot for competition for attention for the critics. So Galpao is always working on making sure that everywhere we go, people are aware of what we do, for how long we have done this and why it works. We are welcomed in most places we go, particularly theater festivals and the relationships we have created with other groups, and arts organisations along the years. For example we have relationships with the Globe and the Battersea Arts Centre, we believe in the great exchange of knowledge and experience and it does happen vice versa. We have received David Jubbs (Executive Director of Battersa Arts Centre) in Brazil and we have contributed for their development and they have contributed to ours.”

Brazil has a  huge and rich variety  of cultures to explore,  to influence and to be influenced  by. This is something that many artistic directors appreciate about Brazilian art, in fact.  Galpao, the awarded theater company, which already owns two spaces is planning the creation of a sustainable building. The new centre will work as a cultural hub, joining  the function of both previous spaces with classrooms, theater research centre, presentation spaces and a very active programme for the local communities. Their influence goes further and beyond. Following their relationship with the Globe Theatre there are  rumors they will play a great part on setting up  Globe Theater being build in the region of Minas Gerais.

After coming to both shows, I went for a drink with the company and the festival crew, including Artistic and Executive Directors from Globe. All were  appreciative of how great  the relationship among them is and how pleased  the Galpao members are  to have, again, been a great success in London.