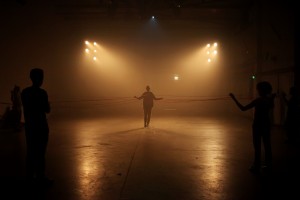 “One thing is to have an amazing idea, the other is how you make that happen” said Turfed Director Brazilian Renato Rocha as he welcomes me at the Hackney Downs’ door. Some of the challenges of Brazilian’s development have been brought to this 10 months long production. Renato travelled Egypt, Tanzania and Kenya with the Street Children World Cup team, which gave him a broader understating of the life of children on the streets. 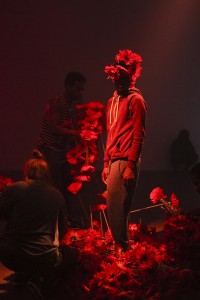 Turfed invites people to enter the street level and homeless life with a one ambient interactive space, offering different perspective of this major issue.

The doors open and as we enter, the mood was calm and focused and the characters were immersed into their singular universes, opening up in their own language, statements of exclusion, lack of love, doubt of existence, raging at life and dreaming of a different future. Throughout the pain and the play, each character seems to go through a process of self-discovery.

The choreography is dynamic, filling the space and offering the audience to watch life move between the fast passing legs, like street kids do.

With angelic voices singing accapella, the show involves emotional moments, when one of the characters, has several red bloody lines leaving her body, pulled and pushed by the other characters whilst opening her chest to truth. The artist Polarbear worked together with the actors building the scripts, making sure the real stories were expressed adding another level of honesty to the acting of the young group.

The lighting, sound design and projections by Valentina Floris and Ben Foot played a part of their own and their flow gave a vibrant rhythm to the sensorial experience of Turfed.

Through football, the characters found hope, inclusion and recognition. When the final goal is scored by the only still homeless kid in the group, all the troupe gets delighted with joy.

They learned how to play together, and all dressed in white, with a large and honest smile on each face,winning and dancing to falling white balloons, the actors take the audience by their hands, inviting us to lay down, and look at the starts, and reflect about wishes.

Jana Costa, actress from the Brazilian circus ‘Crescer e Viver’ is buzzing after the show describing the play as the best moment of her life, but also looking forward to return to Brazil and join the protests with her community and friends.

Turfed rescues football social and cultural values and is an enriching cultural event in London for those seeking alternatives of the World Cup.